Protests have erupted in the US state of Wisconsin after police shot a black man several times while responding to what they said was a domestic incident.

The man, identified as Jacob Blake, is in a serious condition in hospital.

Video posted online appears to show Mr Blake being shot in the back as he tries to get into a car in the city of Kenosha.

Authorities in Kenosha declared an emergency overnight curfew after unrest broke out following the shooting.

Hundreds of people marched on police headquarters on Sunday night. Vehicles were set on fire and protesters shouted “We won’t back down”.

In a public safety alert, police urged 24-hour businesses to consider closing because of “numerous” calls about armed robberies and shots being fired.

Officers used tear gas to try to disperse hundreds of protesters who defied the county-wide curfew, which is in place until 07:00 on Monday (12:00 GMT).

“While we do not have all of the details yet, what we know for certain is that he is not the first black man or person to have been shot or injured or mercilessly killed at the hands of individuals in law enforcement in our state or our country,” he said in a statement.

“We stand against excessive use of force and immediate escalation when engaging with black Wisconsinites.”

Jacob Blake’s name was trending on social media and thousands signed a petition calling for the officers involved to be charged.

Kenosha Police Department said the “officer involved shooting” happened shortly after 17:00 on Sunday. It added that officers had provided “immediate aid” to Mr Blake, who was taken to a hospital in Milwaukee.

It gave no details about what led to the shooting. 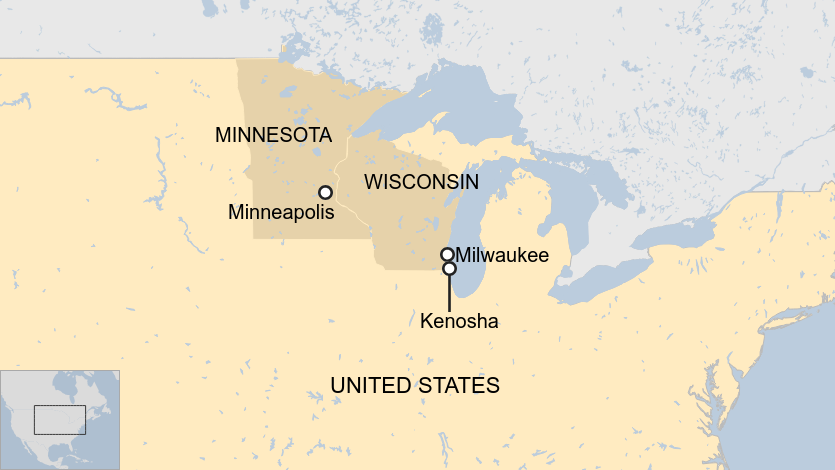 The Wisconsin Department of Justice is investigating the incident. It said the officers involved had been placed on administrative leave.

In video footage shared on social media, three officers can be seen pointing their weapons at a man identified as Mr Blake as he walks around a parked SUV. As he opens the door and leans into the car, one officer can be seen grabbing his shirt and firing his gun. Seven shots can be heard in the video, as witnesses shout and scream.

The officers involved have not been officially named.

Prominent civil rights lawyer Ben Crump told CNN that Mr Blake’s family had reached out to him for assistance.

In a tweet, he said Mr Blake’s three sons were in the car he was getting into when he was shot.

“They saw a cop shoot their father. They will be traumatized forever. We cannot let officers violate their duty to PROTECT us,” he wrote.

He said the shooting happened after Mr Blake tried to break up a fight.

The shooting comes amid heightened tensions in the US over police brutality following the killing of African-American man George Floyd in May.

A white police officer knelt on Mr Floyd’s neck for almost nine minutes before he died in Wisconsin’s neighbouring state of Minnesota. The officer, Derek Chauvin, has been charged with murder.

Mr Floyd’s death sparked Black Lives Matter protests across the US and around the world.

UNESCO names Senegal as the true home of jollof rice