Ghana has been elected as a non-permanent member of the United Nations Security Council after intense lobbying for the position.

The West African country touted as the beacon of peace on the continent will serve on the council from 2022 – 2023.

“Ghana will use its membership to pursue conflict prevention, post conflict reconstruction and strengthening of governance, leveraging on our previous and current experience as Chair of ECOWAS as well as our active membership of AU”, Foreign Affairs and Regional Integration Minister, Shirley Ayorkor Botchwey, said.

Ghana pulled the highest number of votes 185 out of the 190 ballots cast.

The Security Council is among other things, charged with ensuring international peace and security, recommending the admission of new UN members to the General Assembly, and approving any changes to the UN Charter.

The elections were for five non-permanent seats on the UN Security Council for two-year mandates commencing on January 1, 2022.

Ghana has since gaining Independence from Britain on March 7, 1957, been actively involved with the United Nations (UN).

In line with her commitments to multilaterism , Ghana has since March 8, 1957, consistently pursued balanced and principled positions on a wide range of issues on the agenda of the UN, guided by the principles and objectives of the UN Charter.

Against this backdrop, the theme of Ghana’s non-permanent membership of the UN Security Council “Enhancing Global Peace and Security for Sustainable and Inclusive Development” will define the parameters of Ghana’s role within the Security Council while actively pursuing the critical agenda of international peace and security, guided by globally agreed diplomacy, sustainable development, Security Council reforms and human rights as well as the strengthening of partnerships between the UN and regional organizations such as African Union (AU) and the Economic Community of West African States (ECOWAS), in the maintenance of peace and security.

Ghana is joining the Council with its strong democratic credentials, political maturity and independent thinking, respect for the rule of law and human rights, active advocacy for international law, socio-economic successes and previous experiences as a non-permanent member of the Security Council, all of which constitute an attestation to Ghana’s resolve to play an active role as well as fully contribute to the work of the Security Council.

As part of its vision as a non-permanent member of the Security Council, Ghana is further committing itself to the critical agendas of conflict prevention, post-conflict reconstruction and multilaterism at the heart of the UN’s peace and security agenda.

Ghana is also seeking to bring her perspectives, influence and experience in sustainable development; peace and security, and the promotion of human rights in advancing the work of the United Nations Security Council, especially at a time when UN is mobilizing all members States towards fighting the coronavirus pandemic.

Furthermore, Ghana has pledged to continue to advocate for the implementation of the actions recommended by the High-Level Independent Panel on Peace Operations, such as improved strategic planning with a stronger focus on the primacy of politics, better force generation, enhanced safety and security, strengthened efforts to combat sexual exploitation and abuse, continued development of performance standards and the comprehensive reform of UN policing. 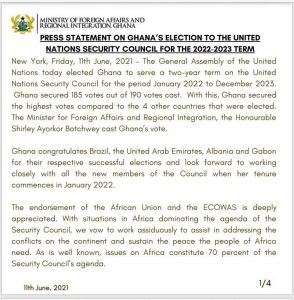 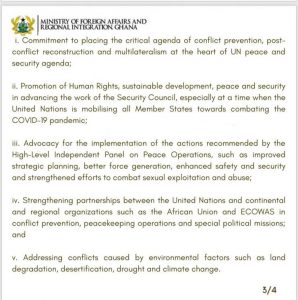 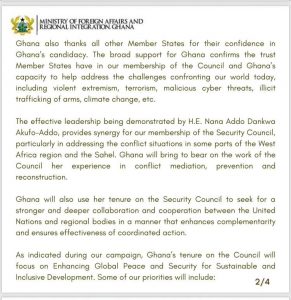 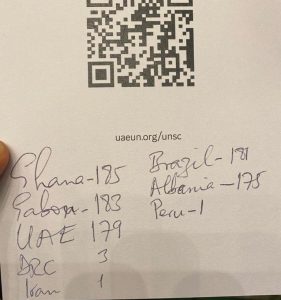 W/R: Health Director threatens to cause arrest of parents over polio immunization