LESCO, A leading Israeli infrastructure company, has donated GH¢1 million towards the construction of the National Cathedral project.

Chairman of Lesco Ghana Limited, Ing. Yariv Brosh, on Monday, was led by former Ghana’s Ambassador to China, Dr. Afari Donkor, to present the cheque for GH¢1 million to the Board of Trustees of the National Cathedral Secretariat.

Ing. Brosh said his outfit decided to donate to the project when the President Akufo-Addo-led New Patriotic Party (NPP) administration openly communicated its plan to construct a national cathedral to honour God.

He noted that the donation formed part of the company’s corporate social responsibility (CSR) to communities within any county it operated in.

He also appealed to other foreign companies operating in Ghana to do their best to support the construction of the project to particularly help the spiritual development of people of this country. 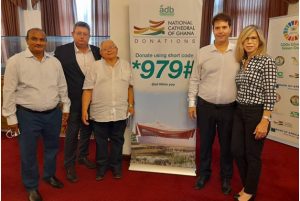 Chairman of the Board of Trustees of the National Cathedral, Apostle Opoku Onyinah, who received the cheque, expressed gratitude to the company for the kind gesture and also called on other foreign entities to emulate the gesture.

According to the National Cathedral Secretariat, the total amount needed to erect the national cathedral has been revised to $350 million from $250 million.

The Secretariat, in September, revealed that the extra $100 million was expected to be held in an endowment fund to ensure the availability of consistent finances to cater for activities related to the cathedral.

The managers of the project also say they want to put in place measures that will ensure that they do not rely on foreign grants to manage the facility.

No more top-ups under our scheme – NHIA